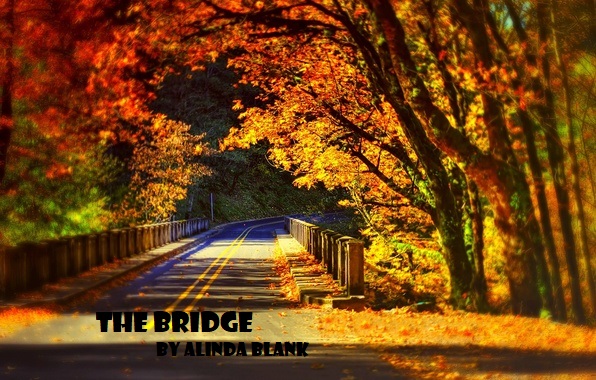 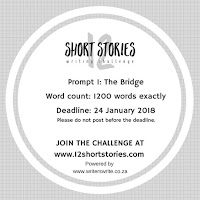 This is a bad idea, a very bad idea. Steve should have just stayed at his dad’s place. What if he never left this town again in his life? That wouldn’t be so bad. He had lived most of his twenty-one years in this town. Growing up here had been fun. Losing his mom had been hard. Falling in love had been easy. Getting out of bed again after had been hard. It is still hard. Every morning is a struggle. His dad is supportive. He knows how Steve is feeling. So Steve had listened to him when he had said it might be a good idea to go back to the place where it all happened. That it would help him move on. And that is how Steve ends up on the side of the road, only meters from the bridge. He feels heavy and tightness controls his chest. His hands rub over his steering wheel. Maybe he should just turn around. He blows his cheeks, pushes the air back out, over and over again. He shouldn’t be here. This is not going to help. He should just go back.

The sun is out today, lighting up the bridge in front of Steve. The trees don’t seem as daunting as they did that day. Now this place just looks like a beautiful forest road. Not like then, when it was pouring so hard that it was hard to see where the road was going. The windscreen wipers had been unable to remove the water fast enough.

Lindsey cycles by and waves at Steve. It takes a couple of seconds before Steve smiles back. His smile wavers and falls quickly. His mouth goes back to the downturn it has been in since that day. His dad had said that he had lost weight. Steve hadn’t noticed. It was just hard to eat. Food is tasteless these days. Steve doesn’t enjoy it anymore like he had. His dad is worried, Steve knows. Maybe that is why he’s been pushing him lately to go do things, like coming here. Was he just doing this to please his dad?

Or was it because he would want him too?

No, he shouldn’t think about him.

He’s doing this for himself.

Steve’s hands shake when he opens the door. He takes a couple of more seconds before he steps out of it and walks towards the bridge. His eyes are focused on his feet, taking one step after another. Water is trickling around rocks and the air smells fresh, like sun-warmed soil and grass. There is no water frothing and crashing around Steve. His clothing is still dry. Still, he feels cold. He looks up when he’s only a couple of steps onto the bridge. The other side looks far away. Steve's legs feel weak. He grabs onto the wooden railing of the bridge. The wood feels all wrong. It should be old and damaged. But the part he’s holding onto is new, replaced after they had gone through it.

Steve closes his eyes for a moment and when he opens them again he forces himself to look at the stream. It’s so peaceful now. Some leaves drift along on the sun-dappled surface. It looks like Steve used to remember it from the times he had spent here in the summer with his friends, swimming and having fun, until the sun would go down and they would make their way back to town to grab something to eat. Only now the only thing Steve can remember is the crashing water, the fast-moving current, the white foam, David’s still body next to him.

An uncontrollable cry makes its way out of Steve’s mouth. He shakes all over and it is difficult to breathe. It had all happened so quickly. He had tried to correct their pad, but it had been too late. Steve can still hear the wood of the railing snap, feel his seat belt strap against his chest, and feel David’s hand grab his, see his terrified eyes look at him.

Steve crumples to the ground as he starts to cry. He had woken up wed and cold, his hand still entwined with David’s. The only sound the crashing water around them. David his head hang in the water that had made its way into the car. Steve pulled his face up. Some water ran out of David's mouth. Steve held his head up with both his hands, keeping it out of the water. He had been crying by then, screaming at David to wake up. But David had been still and cold, unresponsive. Steve hadn’t been able to detect breathing. He tried to give mouth on mouth, but it was hard with all the water coming into the car. He pulled David closer to him, holding him close. He couldn’t lose him yet. Not like this.

He can’t remember how he had gotten out of the car. The next thing he can remember from that day is sitting on the back of an ambulance, a blanket around his cold body. Flashing lights from the emergency vehicles lighting up the dark sky. It had still been raining. Another police cruiser had stopped close to the bridge. Steve hadn’t recognized the person flying out of it until the running man had thrown his arms around him.  He had wailed then, just like he’s doing now. Only now he is alone on this bridge, all alone.

David had drowned that day.

His David had died that day.

And now he is alone.

“Kiddo,” a voice says close to his ear. A hand pulls him from the ground and Steve gets pulled into a hug by a familiar arm. He’s pushed against his father’s chest, which feels safe and warm. Steve is shivering, his body is cold and when he opens his eyes he notices that the sun is setting. How long has he been laying here on the ground?

“Dad?” is all he can say. His voice breaks when the tears come again.

“Lindsey said she had seen you here, so when you weren’t home when I got there I know where to look for you.”

Steve loves how his dad knows exactly what he needs. He had done the same that night. After his father had checked with the EMT that he wasn’t hurt, he had held him and told him what was happening. He had explained the whole process of removing David’s body from the car, checking if he was really dead, where they were taking him. It had helped a little.

After a while, Steve stands up. His dad helps him and he turns towards Steve’s car. Steve looks to the other side of the bridge, tears still running over his cheeks. One day he will cross it again, go back into the world and live the rest of his life because David would want him to.

Alinda Kerstholt-Blank
I’m Alinda, 33 years young, married to a lovely man and after four years of living in South-Africa again a citizen of the Netherlands, where I was born and raised. I write mostly fanfiction about Harry Potter, TeenWolf and Yuri on Ice and since about a year I also write original short stories. I love using my creativity and imagination to create stories. I have the tendency to write dark and/or emotional heart-breaking stories. The exploration into characters that go through heavy turmoil in their lives motivates me to write. When I’m not writing I love to design and sew my own handbags. I also create my own clothing and home décor. Other creative hobbies of mine are making dollhouse miniatures, drawing and I plan to learn crochet this coming year. When I'm not being creative I like to read, cook and play the Sims. I study Small Business & Retail Management and I’m starting up my own business SewLeafy, where I sell handmade handbags.

Other blogs by Alinda